This article written by Daniel Dockery was originally published on July 9, 2020

Fashion is important on the Grand Line. I mean, how do you expect to become King of the Pirates if your crew doesn’t have a mastery of patterns and matching colors? Luckily, the Straw Hat Crew recognizes that being able to win a season of Project Runway is just as important as strength and willpower, and thus they’ve given us some pretty awesome outfits over the years. And just to be clear, from Franky’s speedo to Luffy’s orange vest, there is no bad outfit on Team Luffy. These are just the ten that made me think “Dang. Looking spiffy, Straw Hat.”

When you’re thinking of an iconic One Piece outfit, this is probably the first one that comes to mind. It’s just so simple and yet so effective, much like Luffy himself. It simultaneously screams “I will accomplish my dreams!” and “Let’s go to Myrtle Beach. I’m gonna do a backflip off the balcony of the Marriott.”

Franky has always had one aesthetic and one aesthetic only: guy at a barbecue. His closet on the Thousand Sunny must be nearly bursting with Hawaiian shirts and I can’t fault him for it. You know what they say: If you like something, wear it. If you really like something, wear it over and over again as you and your friends dismantle warlords and fight against the tyranny of the World Government.

Over the time skip, “Soul King” Brook became a musical sensation in the One Piece world, and his outfit in the Fishman Island Arc aka The Straw Hat Reunion Tour reflects that. Gold crown? Feather boa? Bright pants with flowers all over them? I dig that vibe.

Zoro barely bathes (it’s canon) and I imagine that he doesn’t put too much effort into what he wears. He just wants to train, drink, and be stinky — and I’m not one to argue with that. But Zoro’s robes in Wano, the Land of Samurai, make him seem at home.

Luffy’s ensemble in the 3D2Y special looks a lot like his classic red vest, except it has a hood and a fur lining. Honestly, it kinda looks like something you’d find at the Grand Line location of H&M. 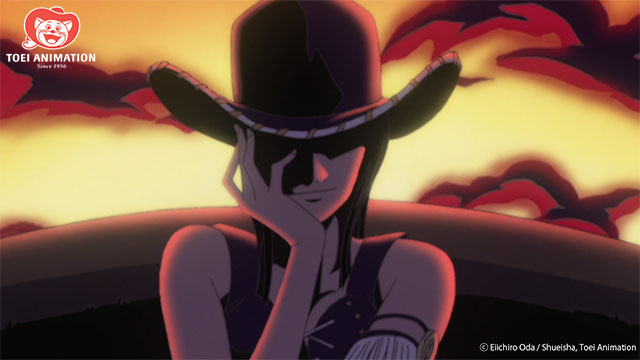 When Robin showed up at the end of the Whisky Peak Arc bathed in both the glow of flame and shadowed by night and smoke, we all thought “Oh my. Who is this beautiful murder cowboy?” Now, I can only assume that all of her outfit is denim, meaning that she somewhat echoes Britney Spears’ jean dress choice for the 2001 American Music Awards, but Robin pulls it off with her mystery and her confident attitude.

Sanji knows what works for him, and since he’s pretty much the Barney Stinson of One Piece, what works is a black suit. But hot take: I think he looks better in his white wedding tux. And slightly less of a hot take than that: I think he looks best in the Stealth Black Raid Suit that he got from Germa 66. When Franky, Usopp, and Law fanboy over it while Sanji beats up a Spinosaurus, I’m right there with them.

That red dress screams Femme Fatale, like she’d show up in a ’70s Bond Film only to beat up James Bond. As a thief, Nami falls in naturally with the plan to trick and then defeat Big Mom, so this dress represents her in her element.

Look at his little cape!

Usopp was a particularly necessary component in the success of the Straw Hats on Thriller Bark. Perona could make people lose their confidence, which rendered Zoro, Franky, and Sanji useless as they run on confidence and very little else. But Usopp was immune to her because he was already depressed to begin with, and thus was ready to take her on. And this attitude was matched by his new duds, made up of a hat, a conquistador-esque feather, a cape, and a necklace of garlic. I wish he’d break this one out every once in a while now.

What is your favorite Straw Hat outfit? Let me know in the comments!

Do you love writing? Do you love anime? If you have an idea for a features story, pitch it to Crunchyroll Features!